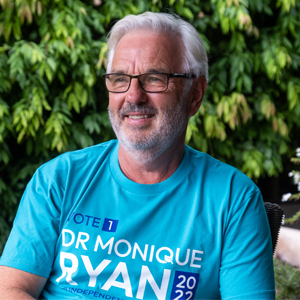 Michael believes independents can get better results for their communities and the country.

I was brought up on a Liberal platform and never questioned it.

Now it hardly makes any difference to me whether we've got a Liberal or Labor government. I’m more interested in whether there is a better way to run the political system, which is less aggressive, with more educated, mature arguments that you just don't get at the moment. The minute someone puts up a policy, it gets screamed down.

"I think it would be better to have someone who understands local concerns, has a breadth of knowledge on bigger picture items and can take those concerns to Canberra and work effectively with others to get results that are not political or motivated by interest groups."

We also need a lot more women in politics and in leadership roles in businesses. So, when Monique put her hand up, I thought, ‘she’s a woman, she’s educated, she’s managed a significant organisation and has not been in the political system before - that’s someone I'd like to support.’

I want to see Monique embraced by our community and I want others to think of her as I do; ‘Yep, she can help us become a more compassionate community and make a difference in Canberra - not just go there and make up the numbers.’

There’s a better way to do this so why not have a crack at having more clear thinking, independent people who are not career politicians? It will be a better result for the community and the country.

Kooyong is a great place to live, but it's the connection to people that is more important for us. I moved to Kew 30 odd years ago with my wife Rosie and it’s where we raised our two kids who are now 25 and 27. We've been actively involved in the local community from when the kids went to Deepdene playgroup and the Davis Street Kindergarten. We’ve met so many people who are lifelong friends.